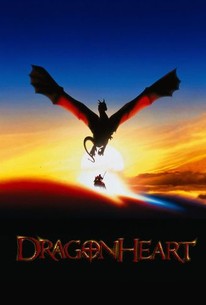 Dragonheart gives us medieval action, a splendidly mulleted Dennis Quaid, and Sean Connery as a talking dragon -- and, unfortunately, a story that largely fails to engage.

A boy and his dragon unite to fight evil in this fantasy. Bowen (Dennis Quaid), a Knight of The Old Code in Medieval times, is summoned by Aislinn the Queen (Julie Christie) to the bedside of her son, Einon, who is also Bowen's student. Einon has been wounded and is near death; with his heart about to give out, Bowen calls upon Draco (voice of Sean Connery), the mightiest dragon in the land, asking for a sliver of his mighty heart so that the boy might survive. Draco makes Bowen pledge that when Enion grows to adulthood and becomes king, he will rule with fairness and compassion before the beast will donate a piece of his heart. Einon agrees to the pledge, but years later, the adult Einon (David Thewlis) has become a cruel despot, in no way good on his promises. Bowen, angry at Einon's betrayal, is convinced that the dragon is somehow responsible and goes on a spree, killing the mammoth reptiles at a fevered pace. However, when Bowen once again encounters Draco, the dragon convinces him that a dragon-slayer who has killed the last dragon also puts himself out of a job; Draco and Bowen work out a business arrangement, where the monster "attacks" villages and Bowen is paid to "kill" him. In time, however, Draco and Bowen realize that they must set aside their lucrative business in order to challenge the authority of the evil ruler. Draco the Dragon was the first fully-computer animated character to have a speaking part along side flesh and blood actors in a film; Sean Connery's recording sessions as the voice of Draco were recorded on video as well as audio tape, so that his facial expressions and mouth movements could be adapted to the character. ~ Mark Deming, Rovi

Kyle Cohen
as Boy In Field