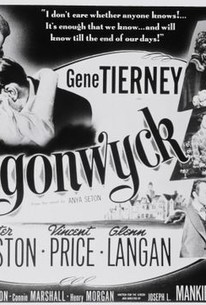 Years before he became the leading star in horror movies, Vincent Price starred in this gothic thriller based on the best-selling novel by Anya Seton. Nicholas Van Ryn (Vincent Price) is a wealthy feudal heir of Dutch ancestry living in New York's Hudson Valley in the 1840s. Nicholas has come to hate his wife because she has been unable to give him a son; their only child is a daughter he doesn't care for. Miranda Wells (Gene Tierney), a distant relative of the Van Ryns, comes to live at their estate and work as an au pair girl; Nicholas becomes infatuated with her and eventually poisons his wife so they can marry. However, while Miranda gives birth to a son, the boy is sickly and does not live to adulthood. Nicholas begins to slip into insanity, moving to the attic of his mansion and drowning his sorrows in drugs. A distraught Miranda seeks the counsel of the local physician, Dr. Jeff Turner (Glenn Langan); Dr. Turner falls in love with Miranda, and he eventually discovers that Nicholas killed his first wife to be with her, and that Miranda might be next on the madman's list. Dragonwyck was the directorial debut of screenwriter and producer Joseph L. Mankiewicz.

Jane Nigh
as Tabitha