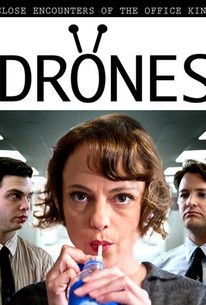 Everyone has unusual co-workers, but one guy finds out his office mates are a good bit stranger than he expected in this independent comedy. Brian Dilks (Jonathan M. Woodward) is a mid-level office worker at a computer firm who spends his days keeping track of shipments, joking with his best friend Clark (Samm Levine) and flirting with Amy (Angela Bettis), an attractive woman who has the cubicle next to him. One day, Amy suggests that she and Brian should go out on a date; he agrees, and before he knows it they're boyfriend and girlfriend. But as Brian and Any get closer, he learns she has a secret -- she's an alien from an unknown galaxy who are keeping tabs of things on Earth and deciding when and if the planet should be destroyed. When Brian tells Clark the truth about Amy, he learns that Clark is an alien, too -- and so are most of his co-workers. Now that Brian has stumbled across a possible interplanetary war, what is he supposed to do about it? Drones was the first feature film from directors Amber Benson and Adam Busch. ~ Mark Deming, Rovi