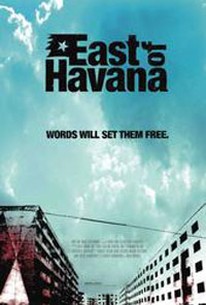 Three talented hip-hop musicians struggle to make themselves heard in a repressive culture in this documentary from filmmakers Jauretsi Saizabitoria and Emilia Menocal. While rap and hip-hop are often cited as the most pervasive and influential musical forms to emerge in public consciousness since 1980, in Cuba rappers and DJs are still waging an uphill battle to gain official acceptance. Soandry (real name Soandres Del Rio Ferrer), Magyori Martinez Veitia, and Mikki Flow (real name Michel Hermida) are three lyricists from Alamar, a small blue-collar community, who are members of a hip-hop collective known as "El Cartel." While they have talent, El Cartel are not recognized as "real" musicians under Cuba's communist government, and must scramble for a chance to perform. Mikki Flow is one of a handful of Cuban underground rappers who have organized the nation's first and only hip-hop festival, but when the threat of a hurricane gives officials an excuse to shut down the festival, Mikki and his compatriots must find a way to reorganize the gathering under the radar of the nation's official music committees. As El Cartel search for new venues for their music, Mikki, Soandry, and Magyori talk about the rise of Cuban hip-hip in the 1990s, the realities behind their conscious lyrics, and Soandry's relationship with his brother, who has defected to the United States. East of Havana was screened as part of the 2006 Los Angeles Film Festival.

News & Interviews for East of Havana

Critical Consensus: "Because" Is Less Than So-So; "Messengers" Not Screened — Guess The Tomatometer!
View All

Critic Reviews for East of Havana

Audience Reviews for East of Havana

There are no featured audience reviews for East of Havana at this time.