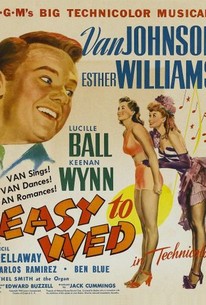 This Technicolor musical remake of the 1936 comedy classic Libeled Lady isn't quite up to the standards of the original, but on its own terms is quite entertaining. Van Johnson, Esther Williams, Lucille Ball and Keenan Wynn expertly assume the roles originally played by William Powell, Myrna Loy, Jean Harlow and Spencer Tracy. Faced with a libel suit from socialite Connie Allenbury (Williams), newspaper editor Warren Haggerty (Wynn) cooks up a plan to beat Connie at her own game. To do this, he must rely upon the romantic chicanery of ex-employee Bill Stevens Chandler (Johnson), with Haggerty's fiancee Gladys Benton (Ball) caught in the middle. The comedy high point of the original Libeled Lady, in which William Powell is forced to demonstrate his (non-existent) prowess as a fisherman, is ably repeated in Easy to Wed when Van Johnson must prove his skills at duck-hunting. The songs aren't anything special, but Lucille Ball's superb comic performance is worth the admission price in itself.

Carlos Ramirez
as Himself

Ethel Smith
as Herself

Mitzie Uehlein
as Girls at Pool

Mildred Sellers
as Girls at Pool

Phyllis Graffeo
as Girls at Pool

Kanza Omar
as Girls at Pool

Louise Burnette
as Girls at Pool

Patricia Denise
as Girls at Pool

Joel Friedkin
as Justice of the Peace

Alex Pollard
as Waiter
View All

Critic Reviews for Easy to Wed

There are no critic reviews yet for Easy to Wed. Keep checking Rotten Tomatoes for updates!

Audience Reviews for Easy to Wed