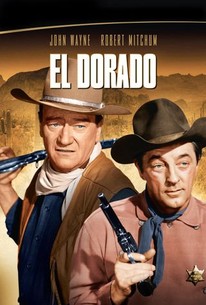 Having struck pay dirt with his 1958 western Rio Bravo, Howard Hawks more or less remade the picture twice in the 1960s. The first of these rehashes was El Dorado, with Rio Bravo star John Wayne back for more. Wayne plays a gunfighter who rides into El Dorado to link up with his old pal, sheriff Robert Mitchum ("It's the big one with the big two!" declared the film's advertisements). Wayne has turned down a job with evil land baron Ed Asner, who'd hoped to drive a family off the land that he needed for its water. That family, headed by R.G. Armstrong, is convinced that Wayne is working with Asner; when Armstrong's son Johnny Crawford dies, Wayne is held responsible, earning him a bullet in the spine from Crawford's sister Michele Carey. A year passes: Wayne returns to El Dorado, in the company of his new saddle pal James Caan. They find that Asner is still up to his old tricks, and that Mitchum has descended into alcoholism. Several plot twists and power shifts ensue, leading to the slam-bang climax, with the partially paralyzed Wayne, the newly crippled Mitchum (on crutches), and the concussion-suffering Caan battling together to stave off Asner's minions. The final long-shot, of Wayne and Mitchum limping off together arm-in-arm, is one of the most enduring images in the entire Hawks canon. If they loved it twice they'll love it thrice: in 1969, John Wayne and Howard Hawks teamed up for a third Rio Bravo derivation, Rio Lobo--which, like the first two films, was scripted by Leigh Brackett. Incidentally, that's famed artist Olaf Weighorst (whose paintings appear in the title sequence) in a cameo as the gunsmith. ~ Hal Erickson, Rovi