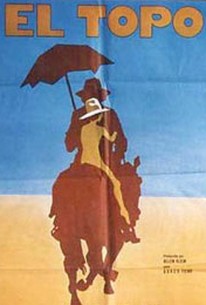 By turns intoxicating and confounding, El Topo contains the creative multitudes that made writer-director Alejandro Jodorowsky such a singular talent.

A bizarre, ultra-violent, allegorical Western, "El Topo" is set in two halves that have widely been compared to the Old and New Testaments of the Bible. In the first half, Jodorowsky plays a violent, black-clad gunfighter who, accompanied by his naked son, sets off on a murderous mission to challenge four Zen masters of gunfighting, and learns from each of them a Great Lesson before they die. In the second half, El Topo sets out to find personal redemption, secluding himself in a subterranean community to learn the ways of peace, but unfortunately death is never far away. First released as an underground film, it was thanks to John Lennon that the film was acquired by Allen Klein of ABKCO, who bought the rights to "El Topo" and then financed Alejandro Jodorowsky's next film "The Holy Mountain."

David Silva
as The Colonel

Paula Romo
as Woman in Black

Robert John
as Brontis as a Man

Alfonso Arau
as Bandit No.1

José Luis Fernández
as Bandit No.2

Alf Junco
as Bandit No.3

Gerardo Cepeda
as Bandit No.4

Rene Barrera
as Bandit No.5

Rene Alis
as Bandit No.6

Federico Gonzales
as Bandit No.7

Vincente Lara
as Bandit No.8

Pablo Leder
as Monk No.1

Cristian Merkel
as Monk No.3

Aldo Grumelli
as Monk No.4

Carlos Lavenant
as Executioner No.1

Eliseo Pereda
as Executioner No.2

Marcos E. Contreras
as Boxer No.1

Arturo Silva
as Boxer No.2

Valérie Tremblay
as Woman In Church

Pedro Garcia
as Man With Carrot