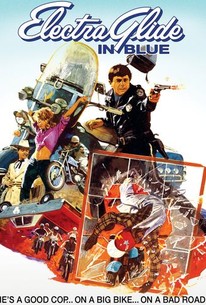 A police officer who would rather use his brains than his gun is put into a situation where neither can help him in this police drama. John Wintergreen (Robert Blake) is a sawed-off and street-smart Arizona motorcycle cop who dreams of climbing the ladder and becoming a police detective, but his ambitions are scoffed at by his partner, Zipper (Billy "Green" Bush). Wintergreen's superiors tend not to take him seriously due to his short stature, but when he stumbles upon the site of a murder, he digs up enough relevant evidence to insure his advancement to detective status. However, after a few days on the job, Wintergreen begins to realize just how corrupt his superior Poole (Mitchell Ryan) truly is after Poole attempts to frame a local hippie, Bob Zemko (Peter Cetera), for a crime he didn't commit. Adding fuel to the fire is Poole's discovery that he and Wintergreen have been dating the same woman, dancer-turned-barmaid Jolene (Jeannine Riley). Electra Glide in Blue was the first (and to date only) directorial credit for James William Guercio. Successful in the music industry as a manager and producer, Guercio was best known for his association with the top-selling jazz-rock group Chicago; several members of the band appear in the movie, as does a young Nick Nolte in a bit part. On a note of sad irony, Terry Kath, the longtime Chicago vocalist who died in 1978 from a self-inflicted gunshot to the head, plays a gun-wielding killer in this film. ~ Mark Deming, Rovi

Bob Zemko
as The Beard

Madura
as Rock Group at Concert