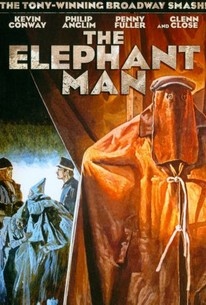 This TV adaptation of Bernard Pomerance's play The Elephant Man differs radically from the 1980 theatrical film of the same name. Both are based upon the same true story: that of John Merrick (1863-1890), an unfortunate citizen of Victorian England who suffered from neurofibromatosis, a hideously deforming disease that all but condemned him to a lifetime of circus sideshows. Though he remained trapped in his misshapen body, Merrick was intellectually and emotionally liberated by London physician Frederick Treves, whose sensitive treatment of the "Elephant Man" unlocked the soul beneath his horrific appearance. But whereas the film was graphically realistic in its use of makeup, the TV version follows the precedent set by Pomerance's play: John Merrick's deformity is conveyed purely through the vocal and physical contortions of actor Philip Anglim, repeating his Broadway role. Also carried over from the stage version is Kevin Conway as Dr. Treves. The TV version of The Elephant Man was telecast as an ABC Theatre of the Month special on January 4, 1982. ~ Hal Erickson, Rovi

Jarlath Conroy
as Will

William Hutt
as Bishop How

There are no critic reviews yet for Elephant Man. Keep checking Rotten Tomatoes for updates!

There are no featured audience reviews for Elephant Man at this time.