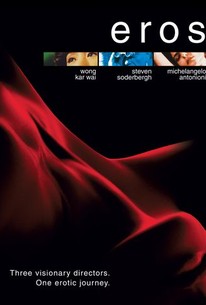 Though Wong's short lives up to the promise of the title, Antonioni's is a serious disappointment.

Three of the world's most gifted filmmakers offer their own unique perspectives on love and lust in this omnibus film. The initial episode, "The Hand," was directed by Wong Kar-Wai, and tells the story of Zhang (Chang Chen), a young, virginal dressmaker's assistant who finds it difficult to control his desire when he is sent to the home of Hua (Gong Li), a beautiful and refined prostitute, for a fitting. Steven Soderbergh directed the film's second story, "Equilibrium," in which Nick Penrose (Robert Downey Jr.) spends a session with his analyst (Alan Arkin) discussing a recurring dream of a beautiful naked woman in his apartment, but he keeps wandering off on tangents about alarm clocks and hair loss. Finally, Italian virtuoso Michelangelo Antonioni brings his short story The Dangerous Thread of Things to the screen, a story of a jaded couple, Christopher (Christopher Buchholz) and Chloë (Regina Nemni), whose relationship comes to a crossroads when both husband and wife become infatuated with the same woman, Linda (Luisa Ranieri).

Luisa Ranieri
as The Girl/Linda

Shin Cheng You
as Tailor

Shih Cheng You
as Tailor

Ele Keats
as The Woman/Cecelia

Cecilia Luci
as Girl by the Cascade

Karima Machehour
as Girl by the Cascade

Maria Bosio
as Guest at the Restaurant

Carla Milani
as Guest at the Restaurant

Vinicio Milani
as Guest at the Restaurant

Ugo Quattrini
as Guest at the Restaurant

Jason Cardone
as Guest at the Restaurant

Carin Berger
as Guest at the Restaurant

Enrica Antonioni
as Guest at the Restaurant
View All