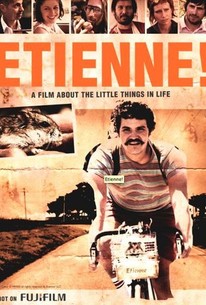 Etienne! tells the story of Richard, a passive and shy type of guy who has an innocent perspective of the world. He has recently taken a sabbatical from college and is trapped in that stage of middle adulthood where one doesn't know what to do next. In the meantime, he spends his days taking care of his best friend, Etienne, a dwarf hamster. With many elaborate hamster contraptions, mammal habitats, and even micro-helicopters, Richard builds a special world for his pocket pet and treats his animal companion as he would like to be treated. One day Richard finds out that his hamster has terminal cancer. The Veterinarian recommends euthanasia before the animal begins to suffer. But with the advice of the more caring front desk clerk at the clinic, Richard decides to take Etienne on a bicycle road trip to give it a chance to see the world before it dies. They travel to different locations around northern California. As Etienne experiences a vast new world, so does Richard. Their adventures introduce them to new discoveries about life and the people in it. Etienne! tells the story of Elodie, a young free spirit who has been emotionally crushed after a breakup with her long-term boyfriend. The comfort and structure of that relationship, now broken, has put new perspectives on her life. She decides to take a break from college to reconnect with her former independence. She throws away the maps and heads off on a road trip of self-discovery. Like Richard's adventure, she meets various characters along the way who help her get over her insecurities and reach a new chapter in her life. As Richard and Elodie's journeys unfold, the two become fatefully connected. And as both of their stories collide, the life of Etienne turns their cosmic worlds into a much smaller place. -- (C) Official Site

Caveh Zahedi
as Man in Coat

There are no featured audience reviews for Etienne! at this time.