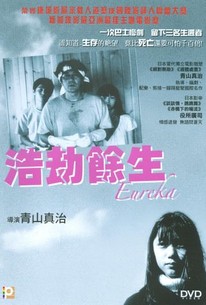 With its subtitles and a running time nearing four hours, Eureka certainly places demands upon its viewers. For those with the patience, however, this visually lovely film builds to an emotionally resonant vision of transcendence.

One of the leading voices in the new Japanese cinema, Shinji Aoyama directs this spare, emotionally rich saga about memory, grief, and redemption, recalling such films as The Sweet Hereafter and Fearless (1993). Shot in stark black and white, the film opens midway through a bloody hijacking of a bus in rural Japan. The crazed terrorist (Riju Go) shoots and kills two hostages before the police even arrive and start to negotiate by phone. Stepping out of the bus, the hijacker drags bus driver Makoto (Koji Yakusho) along for cover, but when the driver faints and falls to the ground, the terrorist gets shot by police snipers. In his last dying effort, the hijacker stumbles back on board the bus and murders another passenger in front of a pair of shocked schoolchildren, Naoki (Masaru Miyazaki) and Kozue (Aoi Miyazaki). Two years later, Makoto's weird habit of wandering off unannounced for days at a time finally takes its toll on his marriage. Meanwhile, Naoki and Kozue are left mute from the experience, though they can communicate with each other without words. The silent siblings' mother soon walks out of her marriage and their father dies, leaving them alone in a large house with a substantial insurance check. Though Makoto continues to work at a construction company, he utterly ignores the advances of a comely office worker, and his strange behavior starts to raise a few eyebrows. When the bodies of murdered women begin washing up on a nearby river bank, Makoto's brother suspects him and asks him to leave their family house. Makoto shows up on Naoki and Kozue's doorstep, and soon the trio form a family of sorts. Their relative peace and order is upset by Akihiko (Yohichiroh Saitoh), the bumptious cousin from the city who is insensitive to the trauma that the trio have endured and who is increasingly suspicious of the kids' ersatz guardian. His disapproval of Makoto grows further when a clerk at his construction company turns up dead and Makoto is the prime suspect. He is ultimately released, due to a lack of evidence. For most movies, the events so far would be plenty grist for the mill, but for this film, which clocks in just shy of four hours, it functions merely as a set-up for the poignant emotional journey at the center of Eureka. Looking to break out of their routine, Makoto purchases a minivan, converts it into a camper, and takes his three housemates on an odyssey that begins at the site of the hijacking and ends at the sea. Eureka won the prestigious FIPRESCI Award at 2000 Cannes Film Festival.