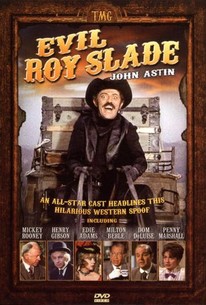 Overlooked when it first aired February 18, 1972, the made-for-TV Evil Roy Slade has gained a loyal and protective cult following in the past 20 years. The film was the second pilot for a never-sold TV western spoof created by Garry Marshall and Jerry Belson, Sheriff Who?. Actually, it was the second and third pilot, since Evil Roy Slade has been cobbled together from two hour-long films. John Astin is terrific in the title role, playing an outlaw so repulsive that, when he was orphaned and left stranded in the desert as a baby, even the wolves didn't want him! As an adult, Evil Roy Slade can't resist "going the extra mile" in his nastiness: while robbing a bank, he stops to pilfer a fountain pen chained to one of the desks, and the next shot shows Slade riding off into the sunset, dragging the desk behind him. Attempting to reform for the sake of pretty schoolmarm Betsy Potter (Pamela Austin), Slade simply cannot curb his crooked tendencies, so it's up to Dick Shawn as singing Sheriff Bing Bell ("Will somebody please answer that door?") to bring the criminal to justice. Shawn previously appeared in the original 1967 Sheriff Who? pilot as the "fastest interior decorator in the West"; in both films, he's almost unbearably funny. The Marshall/Belson script is full of hilarious running gags and throwaway jokes. Our favorite bit concerns railroad magnate Mickey Rooney's legendary stubby index finger: "They still sing about it around campfires at night," claims Rooney--and indeed, they do. The supporting cast includes such never-fail laughgetters as Milton Berle, Henry Gibson, Dom DeLuise and Edie Adams; also, keep a lookout for John Ritter and Penny Marshall in unbilled bits.