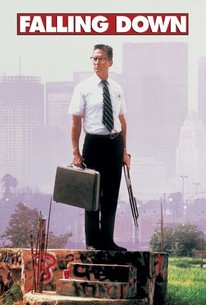 Falling Down's popcorn-friendly take on its complex themes proves disquieting -- and ultimately fitting for a bleakly entertaining picture of one man's angry break with reality.

It's just not William Foster's (Michael Douglas) day. Laid off from his defense job, Foster gets stuck in the middle of the mother of all traffic jams. Desirous of attending his daughter's birthday party at the home of his ex-wife (Barbara Hershey), Foster abandons his car and begins walking, encountering one urban humiliation after another (the Korean shopkeeper who obstinately refuses to give change is the worst of the batch). He also slowly unravels mentally, finally snapping at a fast-food restaurant that refuses to serve him breakfast because it's "too late." Running amok with an arsenal of weapons at the ready, Foster -- also known as "D-FENS" because of his vanity license plate -- rapidly becomes a source of terror to some, a folk hero to others. It's up to reluctant cop Prendergast (Robert Duvall), on the eve of his retirement, to bring D-FENS down.

Mathew Saks
as Officer At Station

Brent Hinkley
as Rick at Whammyburger

Dedee Pfeiffer
as Sheila at Whammyburger

Carol Androsky
as Woman Who Throws Up

Margaret Medina
as Lita the Waitress

Jack Betts
as Frank the Golfer

Al Mancini
as Jim the Golfer

John Diehl
as Dad at Back Yard Party

Amy Morton
as Mom at Back Yard Party

Abbey Barthel
as Trina at Back Yard Party

News & Interviews for Falling Down

Critic Reviews for Falling Down

Audience Reviews for Falling Down