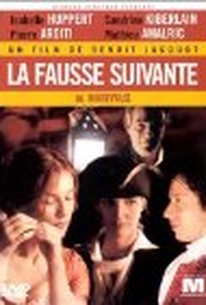 This droll comedy from France was based on a popular stage play by the 18th century author Marivaux. As a lark, an attractive young heiress (Sandrine Kiberlain) disguises herself as a man as she travels with a servant for a weekend getaway to the estate of her close friend the Countess (Isabelle Huppert). En route, the heiress, introducing herself as "The Chevalier," encounters Lelio (Mathieu Amalric), the Countess' fiancée. Talking "man to man," Lelio confides that he isn't really in love with the Countess, but he is eager to get his hands on her dowry. He'd prefer to marry another woman he's met, who has an even greater fortune -- the heiress. However, he has already agreed to pay the Countess a considerable fortune if he breaks off the engagement; he's hoping that someone else will take her off his hands so that he can woo the heiress and come out ahead. The heiress, now aware just how much of a louse Lelio is, agrees as the Chevalier to romance the Countess, knowing that if "he" can win her away from Lelio, he'll be out of an income on both sides. Director Benoit Jacquot filmed La Fausse Suivante in a theater, using vintage costumes and minimal props to help retain the flavor of the stage production. ~ Mark Deming, Rovi

Isabelle Huppert
as The Countess

Sandrine Kiberlain
as The Chevalier

There are no critic reviews yet for False Servant (La Fausse Suivante). Keep checking Rotten Tomatoes for updates!

There are no featured audience reviews for False Servant (La Fausse Suivante) at this time.