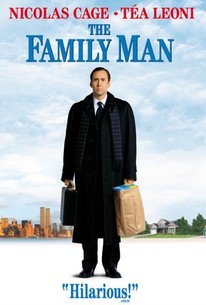 Despite good performances by Cage and especially by Leoni, The Family Man is too predictable and derivative to add anything new to the Christmas genre. Also, it sinks under its sentimentality.

The Family Man: Official Clip - What Are You Sure About?

1:46
The Family Man: Official Clip - I Never Stopped Loving You

1:43
The Family Man: Official Clip - Jack Loses It on Kate

2:36
The Family Man: Official Clip - This Is a Glimpse

1:26
The Family Man: Official Clip - Interview at the Old Job

2:20
The Family Man: Official Clip - A Life That Other People Envy

Wall Street playboy, Jack Campbell is at the top of his professional game with little time for anything else. Jack's lavish, fast-paced lifestyle drastically changes one snowy Christmas night when he unwittingly stumbles into the middle of a grocery store holdup and in a bold display of self-preservation disarms the gunman. The next morning he wakes up in a suburban New Jersey bedroom lying next to Kate, his college sweetheart who he left in order to pursue his career, and to the horrifying discovery that his former life no longer exists. As he stumbles through this alternate suburban universe, Jack begins to feel strangely comfortable in this new role of loving husband and father to two children. Jack finds himself at a crossroad, where he must choose between his high-powered career and the woman he loves.

John O'Donohue
as Tony the Doorman

Lucy Lin
as Executive No. 1

Lisa Lo Cicero
as Executive No. 2

Mak Fai
as Grandfather at Deli

Maggi-Meg Reed
as Lady in Deli

Lisa Guzman
as Girl at Market

News & Interviews for The Family Man

Critic Reviews for The Family Man

Audience Reviews for The Family Man