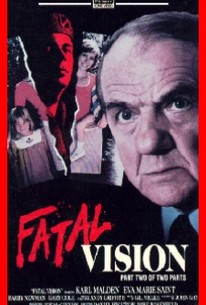 Convicted murderer Dr. Jeffrey MacDonald had hoped that, by telling his side of the story to investigative journalist Joe McGinniss, the authorities would be persuaded of MacDonald's innocence. Instead, McGinniss ended up unswerving in his belief of MacDonald's guilt, and the result was the devastating best-seller Fatal Vision. In this two-part TV adaptation of McGinniss' book, Gary Cole plays MacDonald, a former Green Beret officer, while Frank Dent essays the role of McGinniss. MacDonald's wife and two children are brutally murdered in their Fort Bragg, North Carolina home on February 17, 1970. The prime suspect, MacDonald insists that the killings were committed by a gang of stoned-out hippies, a story that at first is accepted in toto by the doctor's father-in-law Freddy Kassab (Karl Malden). But after MacDonald is officially exonerated, Kassab notices several holes in his son-in-law's story, and becomes convinced that MacDonald was in fact the murderer. Through Kassab's persistence, as well as the uncovering of new forensic evidence, MacDonald is ultimately convicted for all three murders in 1979. Since the TV premiere of Fatal Vision on November 18 and 19, 1984, there has been a growing movement by MacDonald's sympathizers to discredit McGinniss' book and to retry the case--a movement that has been hampered time and again by MacDonald's own erratic behavior.

Miguel Sandoval
as MP in Jeep

There are no critic reviews yet for Fatal Vision. Keep checking Rotten Tomatoes for updates!