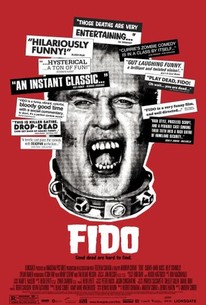 Making the most of its thin premise, Fido is an occasionally touching satire that provides big laughs and enough blood and guts to please gorehounds.

Welcome to Willard, a small town lost in the idyllic world of the '50s, where the sun shines every day, everybody knows their neighbor, and rotting zombies deliver the mail. Years ago, the earth passed through a cloud of space dust, causing the dead to rise with a craving for human flesh. A war began, pitting the living against the dead. In the ensuing revolution, a corporation was born: ZomCon, who defeated the legions of undead, and domesticated the zombies, making them our industrial workers, our domestic servants--a productive part of society. ZomCon would like the people of Willard to believe they have everything under control -- but do they? Timmy Robinson doesn't think so. At 11, Timmy already knows the world is phony baloney -- Mom and Dad just won't admit it. Now ZomCon's head of security has moved in across the street, and Timmy's Mom refuses to be the only housewife on the block who doesn't have a zombie of her own. When she brings a zombie servant home, Timmy discovers a new best friend, and names him Fido. And even though Dad has a bad case of zombie-phobia, Timmy is determined to keep Fido, even if he does eat the odd person. Sometimes, it takes a dead man to teach us all what it means to be alive.

John B. Lowe
as Priest

50 Fresh Scary Movies and TV Shows to Watch on Netflix
Now Streaming: Lawrence of Arabia, Insomnia, And More
George A. Romero on Diary of the Dead: The RT Interview
View All