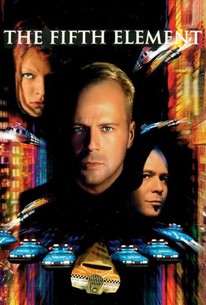 Visually inventive and gleefully over the top, Luc Besson's The Fifth Element is a fantastic piece of pop sci-fi that never takes itself too seriously.

1:32
The Fifth Element: Official Clip - Choking on a Cherry

Good and evil battle for the future of 23rd century Earth in this visually striking big-budget science fiction epic. In the movie's prologue, which is set in 1914, scientists gather in Egypt at the site of an event that transpired centuries earlier. Aliens, it seemed, arrived to collect four stones representing the four basic elements (earth, air, fire and water) - warning their human contacts that the objects were no longer safe on Earth. A few hundred years later (in the 23rd century), a huge ball of molten lava and flame is hurtling toward Earth, and scientist-holy man Victor Cornelius (Ian Holm) declares that in order to prevent it from destroying the planet, the same four elemental stones must be combined with the fifth element, as embodied by a visitor from another world named Leeloo (Milla Jovovich). However, if the force of evil presents itself to the stones instead, the Earth will be destroyed, and an evil being named Zorg (Gary Oldman) will trigger the disaster. Despite her remarkable powers, Leeloo needs help with her mission, and she chooses her accomplice, military leader-turned-cab driver Korben Dallas (Bruce Willis), when she literally falls through the roof of his taxi. Writer and director Luc Besson began writing the script for The Fifth Element when he was only 16 years old, though he was 38 before he was able to bring it to the screen. ~ Mark Deming, Rovi

John Hughes
as Head of Military

News & Interviews for The Fifth Element

Critic Reviews for The Fifth Element

Audience Reviews for The Fifth Element