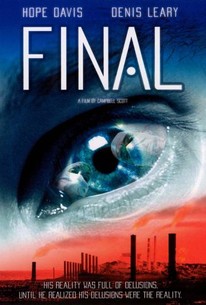 A man struggles to prove he isn't insane -- which is no mean feat when you're certain you're been transported 400 years into the future. Anne (Hope Davis) is a psychiatrist working at a hospital for the criminally insane whose latest charge is Bill Tyler (Denis Leary), a man who was recently admitted when he was found inside a wrecked truck found in a quarry. Bill isn't sure just where he is or what's happened to him, but he's certain he's traveled four centuries into the future, and if he can't find a way to get back to the past within 48 hours, assassins will execute him by lethal injection. Anne is bemused by Bill's odd story, but doesn't challenge him on it, instead questioning him in detail about everything he can recall about his past prior to being brought in. As Bill rants about lasers and holographic images, shares his periodic hallucinations, and discusses his feelings about his family and his former girlfriend, he becomes increasingly lucid, and Anne has to figure out how much of Bill's story is fantasy, and how much is fact. Final was written by Bruce McIntosh, who based the script on his own stage play; the feature (shot on digital video) was directed by actor Campbell Scott.

Tina Benko
as Blonde in Bar

Seth Barrish
as Staff Member No. 1

Catherine Brophy
as Staff Member No. 2

Jody Burke
as Coroner
View All

There are no featured audience reviews for Final at this time.