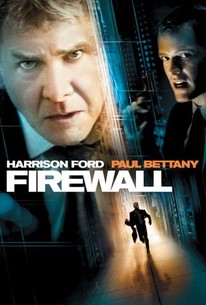 A businessman becomes the last line of defense for his family and his business in this thriller. Jack Stanfield (Harrison Ford) is an upper-echelon technology executive at Landrock Pacific Bank, a leading financial institution based in Seattle. Stanfield oversees security for Landrock, and has made sure that their online banking services are the best-protected in the world, and that the bank's data is safe from hackers and other intruders. However, Stanfield finds out the hard way that his system does indeed have a flaw when he's visited by Bill Cox (Paul Bettany), a cold and calculating man who has spent months learning everything there is know about Stanfield and his family. Cox's underlings have taken Stanfield's wife, Beth (Virginia Madsen), and their two children hostage, and they inform Jack that they will be released only when he uses his knowledge of the bank's security systems to deposit 100 million dollars in Cox's account in an offshore bank. Stanfield is deeply wary but willing to go along to ensure the safety of his family, but when he has reason to doubt that Cox and his cohorts will live up to their end of the bargain, he swings into action to exact justice against the criminals. Firewall also stars Alan Arkin, Robert Forster, and Mary Lynn Rajskub. ~ Mark Deming, Rovi

Rebecca Robbins
as Girlfriend
View All

Box Office Guru Preview: Comedy vs. Cannibals at the Multiplexes
Virginia Madsen Isn’t Mrs. Indy … But She’d Love to Be Asked
Bettany Not Too Likely to Play The Joker
View All