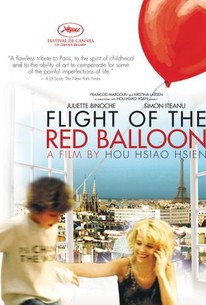 Hou Hsiao-hsien's remake of the 1956 classic is unhurried, contemplative, and visually rapturous.

Le Voyage du Ballon Rouge (Flight of the Red Balloon), which constitutes celebrated Taiwanese director Hou Hsiao-Hsien's first French-language picture, represents both an homage to Albert Lamorisse's beloved 1956 short The Red Balloon and an expansion of that earlier picture. Hou begins with Lamorisse's central conceit -- that of a mysterious red balloon tracking a lonely young French boy around the city -- and broadens the story to weave an extended meditation on urban isolation and dysfunctional, slightly broken Parisian lives. The red balloon here acts as a kind of observer to a little boy named Simon (Simon Iteanu), who lives with his harried mother, Suzanne (Juliette Binoche) -- a voice actress in a puppet theater -- in a cramped flat in the City of Lights. Simon spends the majority of his time away from Suzanne, accompanied by a Chinese film student, Song (Song Fang), who baby-sits. From time to time, Suzanne recognizes her neglect of young Simon and then overcompensates with sporadic bursts of affection and devotion. She remains far more concerned with the pressures of her daily life -- specifically, the problems wrought by her downstairs tenant (Hippolyte Giardot) and by Simon's ere-estranged father -- than with the emotional state of her young son. Meanwhile, Song finds the parallels between the suddenly emergent red balloon and the plotline of the Lamorisse short rather mesmerizing, and films young Song with the balloon to underscore this point. For the most part, Hou foregoes major story developments and simply uses screen time to witness the interaction of Song, Suzanne, and Simon as they live out existences of quiet despair. ~ Nathan Southern, Rovi

Anna Sigalevitch
as Anna
View All

Critics Consensus: Leatherheads Has its Ups and Downs; Nim’s Island is Stranded; Guess The Ruins‘ Tomatometer!
View All