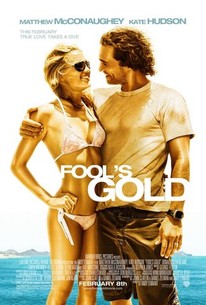 With little chemistry among the performers, humorless gags, and a predictable storyline, Fool's Gold fails on every level.

How to Lose a Guy in 10 Days co-stars Kate Hudson and Matthew McConaughey re-team on the big screen for this adventurous tale about a treasure-hunting couple whose eight-year quest for the ultimate prize has left them flat broke and fresh out of gas. Ben "Finn" Finnegan (McConaughey) is a treasure hunter who has made it his mission in life to track down the Queen's Dowry -- a legendary collection of 40 chests filled with priceless treasure, and lost at sea in 1715. But in his single-minded quest to track down this sizable booty, Finn has sadly neglected his marriage to his loving wife Tess (Hudson). Tess has grown tired of the hunt, and now she's looking to start her life anew by going to work on the massive yacht of globetrotting billionaire Nigel Honeycutt (Donald Sutherland). But just as Tess begins to relish the freedom on her new, laid-back lifestyle, Finn uses his roughish charm to convince the adventurous baron and his debutante daughter Gemma (Alexis Dziena) that the elusive Spanish treasure is finally within reach. Of course no magnate in his right mind would reject the prospect of tracking down the most mythical treasure on the planet, and now as the hapless Tess is forced on yet another wild goose chase, her husband's former mentor Moe Fitch (Ray Winstone) and a greedy local gangster (Kevin Hart) up the stakes by joining in on the race. ~ Jason Buchanan, Rovi