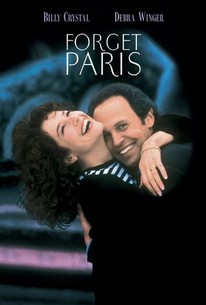 In addition to its titular exhortation, Forget Paris also forgets to offer rom-com fans enough romance or comedy to fill a feature worth remembering.

Actor Billy Crystal co-wrote, directed, and starred in this romantic comedy. Forty-something couple Andy (Joe Mantegna) and Liz (Cynthia Stevenson) are about to be married, and as they gather with their friends for dinner not long before the wedding, they are told the story of their mutual friends Mickey (Billy Crystal) and Ellen (Debra Winger) as a cautionary tale of where a relationship can go wrong. Mickey is a top referee with the NBA who has traveled to Paris to bury his father, who wanted to be laid to rest with his Army buddies from World War II. The body is somehow lost in transit, and Mickey has an argument with Ellen, who works for an American airline in France. However, she likes his sense of humor, he is taken with her, and after a few days together in Paris, they decide to marry. However, once they return to Mickey's home in the United States, things get complicated; she's not so sure that she cares for his bachelor apartment ("a shrine to watching ESPN"), or juggling her career against his, while both have problems with their respective families. Several major basketball stars and sports figures appear in Forget Paris as themselves, including Charles Barkley, Bill Walton, Kareem Abdul-Jabbar, and Marv Albert. ~ Mark Deming, Rovi

Bill Walton
as Himself

Charles Barkley
as Himself

David Robinson
as Himself

Dan Majerle
as Himself

Kevin Johnson
as Himself

Paul Westphal
as Himself

Sean Elliott
as Himself

Patrick Ewing
as Himself

David Sanborn
as Himself

Tim Hardaway
as Himself

Kareem Abdul-Jabbar
as Himself

Bill Laimbeer
as Himself

Reggie Miller
as Himself

Charles Oakley
as Himself

Kurt Rambis
as Himself

John Starks
as Himself

Isiah Thomas
as Himself

Spud Webb
as Himself

Marcus Johnson
as Himself

Rush Limbaugh
as Himself

Andy Flaster
as Airline Official No. 1

Andreas Tessi
as Airline Official No. 4

Emmy Smith
as Woman in Porsche

Rick Gunderson
as Motorcycle Cop No. 1

Liz Sheridan
as Motorcycle Cop No. 2

Irving Wasserman
as Man in Car

Kris Storsberg
as Dancer
View All