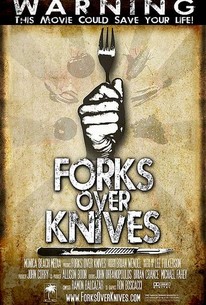 Documentary filmmaker Lee Fulkerson explores the possibility that so-called "diseases of affluence," such as heart disease, can be reversed by simply adjusting our diets to include less processed and animal-based foods. Back in the 1960s, Cornell University nutritional scientist Dr. T. Colin Campbell was working to find a way to feed the citizens of impoverished Third World nations when a trip to the Philippines forever changed the way he thought about food consumption. There, he discovered that the rates of liver cancer among affluent children who subsisted on diets rich in animal-based foods were notably higher than in children consuming plant-based diets. Meanwhile, surgeon Dr. Caldwell Esselstyn, head of the Breast Cancer Task Force at Cleveland Clinic, was also discovering that many of the diseases he was seeing in patients were practically nonexistent in areas of the world where people were primarily consuming plant foods. Several subsequent investigations by the researchers (who would not meet each other until the 1980s), including a groundbreaking study in China by Dr. Campbell, led them to the revelation that a whole-food, plant-based diet could prevent, and even reverse, such degenerative conditions as type 2 diabetes, heart disease, and some forms of cancer. In this film, Fulkerson examines Dr. Campbell's and Dr. Esselstyn's theories by following the two doctors' individual, yet very similar, story arcs, from their farm-based upbringings to their astounding discoveries. The film also records the experiences of a group of patients suffering from chronic maladies as they participate in an experiment in which their diets are substantially altered and wholesome, plant-based food is, essentially, used as medicine. ~ Jason Buchanan, Rovi

News & Interviews for Forks Over Knives

Critic Reviews for Forks Over Knives

Audience Reviews for Forks Over Knives