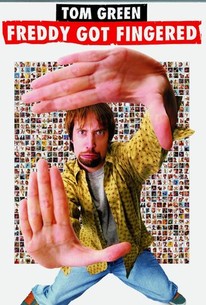 Unfavorably comparing it with such infamously bad titles as Battlefield Earth, a significant number of critics are calling Tom Green's extreme gross-out comedy the worst movie they have ever seen.

Television star Tom Green makes his directorial debut with this gross-out comedy. Green stars as Gord Brody, a 28-year-old slacker who aspires to be an animator of Hollywood cartoons. After his dreams of working for studio mogul Dave Davidson (Anthony Michael Hall) temporarily wash out, along with his thankless job at a cheese factory, Gord returns home to live with his parents, Jim (Rip Torn) and Julie (Julie Hagerty). Jim wishes that Gord would simply grow up, move out of the basement, and get a real job like his younger brother Freddy (Eddie Kaye Thomas), who works in a responsible position at a bank. When the battle of wills between Gord and Jim heats up, Gord devises various stunt-like schemes to drive his father bonkers, including the bogus charge that their father molested Freddy as a youngster. Marisa Coughlan co-stars as Gord's wheelchair-bound, nymphomaniac, amateur rocket-scientist girlfriend Betty, while comedian and Green's fellow Canada native Harland Williams plays Gord's oddball neighbor Darren. ~ Karl Williams, Rovi

John R. Taylor
as Farmer No. 1

Bob Osborne
as Farmer No. 2

David Neale
as Restaurant Man No. 1

Scott Heindl
as Restaurant Man No. 2

Balinder Johal
as Indian Woman No. 1

Kamaljeet Kler
as Indian Woman No. 2

News & Interviews for Freddy Got Fingered

Critic Reviews for Freddy Got Fingered

Audience Reviews for Freddy Got Fingered