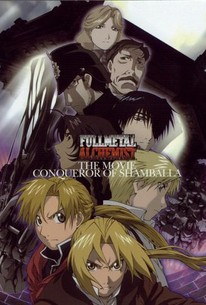 Two brothers trapped in different worlds struggle to unlock the secrets that will bring them back together in this feature-length entry into the Full Metal Alchemist saga. The year is 1923, and the burgeoning Nazi party is slowly gaining a foothold in German politics. It's been two long years since Edward Elric's bold sacrifice found him thrust into the unfamiliar Earth realm, and as he continues to research rocketry in Munich alongside fellow researcher Alphons Heiderich -- a scientist who strangely resembles Ed's long-lost brother Al -- the slow progress leaves the discouraged Ed wondering if he'll ever see his brother again. But you never know what the future holds, and when Ed saves a psychic Gypsy girl, he quickly finds himself immersed in a plot by the mysterious Thule Society and the rising Nazi Party that threatens to thrust both Earth and his home planet into a horrible war. Little does Ed know that back on his home planet, his brother Al has been conducting a series of experiments in alchemy and mastering incredible powers in hopes of locating his desperate sibling. Though the combined forces of alchemy and science may indeed yield enough power to bring the brothers back together, the chaos that could follow threatens to cause more bloodshed than either Ed or Al ever imagined.

Critic Reviews for Fullmetal Alchemist the Movie: Conqueror of Shamballa

Audience Reviews for Fullmetal Alchemist the Movie: Conqueror of Shamballa