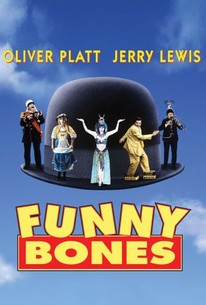 Tommy Fawkes (Oliver Platt) is a struggling stand-up comedian who has tried for years to get out from under the shadow of his father, George Fawkes (Jerry Lewis), himself a famous humorist. Tommy finally scores a showcase spot at a major resort in Las Vegas, but when opening night rolls around, Tommy's act is an unqualified disaster, with the failure made even more painful by his father's presence in the audience. In search of a fresh start, Tommy heads to Blackpool, England, where he was born and raised, to look for a new act. Hoping to buy material from local performers, Tommy auditions a large number of acts, most of whom are utterly hopeless, until he sees a hilarious vaudeville team, the Parker Brothers. Their act seems more than a bit familiar, however, and Tommy soon realizes that they're doing his father's old material. But they have every right to be doing George's schtick -- it seems George stole his act from the Parkers ages ago. What's more, the younger and more eccentric of the Parker Boys, Jack (Lee Evans), is actually Tommy's half brother, the product of a fling with a Blackpool showgirl years ago. Veering between comedy and drama, Funny Bones has more than its share of effective moments on either side of the fence, and features fine supporting performances from Oliver Reed, Leslie Caron and Harold Nicholas.

The Nicholas Brothers
as Harold as Himself

Phil Kelly
as Himself

Andy Thompson
as Leo the Leprechaun

Peter Brande
as Leo the Leprechaun