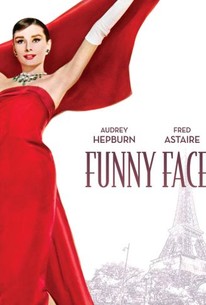 This filmed version of the 1927 George Gershwin Broadway musical Funny Face utilizes the play's original star, Fred Astaire, and several of the original tunes, then goes merrily off on its own. Astaire is cast as as fashion photographer Dick Avery (a character based on Richard Avedon, the film's "visual consultant"), who is sent out by his female boss Maggie Prescott (Kay Thompson) to find a "new face". It doesn't take Dick long to discover Jo (Audrey Hepburn, who does her own singing), an owlish Greenwich Village bookstore clerk. Acting as Pygmalion to Jo's Galatea, Dick whisks the wide-eyed girl off to Paris and transforms her into the fashion world's hottest model. Along the way, he falls in love with Jo, and works overtime to wean her away from such phony-baloney intellectuals as Professor Emile Flostre (Michel Auclair). The Gershwin tunes include the title song, "S'wonderful", "How Long Has This Been Going On" and "He Loves and She Loves"; among the newer numbers is Kay Thompson's energetic opener "Think Pink". For years available only in washed-out, flat prints, Funny Face was eventually restored to its full Technicolor and VistaVision glory. ~ Hal Erickson, Rovi

Gabriel Curtiz
as Man Next to Hand Stand

Jerry Chiat
as Man on Head