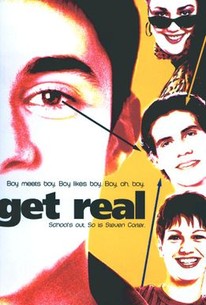 An authentic portrayal of homosexuality in high school, Get Real is an engaging dramedy that doesn't sermonize its audience nor trivialize its characters.

Simon Shore manages the transition from television and documentary to feature filmmaking with great assurance in his debut, the captivating, gay comedy Get Real, based on Patrick Wilde's stage success, What's Wrong with Anger? Shore recounts an appealing tale of a teenaged schoolboy coming to grips with his emerging sexuality. Sixteen-year-old Steven is just another teenager: He listens to the latest music, plays computer games, hangs out with friends. But Steven has a secret: He's in love with the school's top athlete, the devastatingly handsome John Dixon. Not surprisingly, Dixon is dating a model and is the object of every girl's attention. Steven certainly can't tell his parents, and none of his friends know he's gay; he can only confide in his best pal, the overweight, feisty Linda, who wants a romance of her own. As if this weren't complicated enough, Steven discovers that one of the girls at school has developed a crush on him. And then Dixon notices Steven's attention. Shore and his cast of youngsters do a wonderful job of capturing the secret lives of his teenage characters. He penetrates the hearts and minds of people trying to understand their complex sexual yearnings, while compensating for the expectations of parents, friends, and society. Fresh, youthful, and invigorating, Get Real establishes its moving tone from the beginning and doesn't let go; it takes an incisive voyage into the world of a gay teenager trying to tell the world that there's nothing wrong with being in love.

Stacy A. Hart
as Jessica

Jacquetta May
as Steven's Mother

Leonie Thomas
as Aunt at Wedding

Critic Reviews for Get Real

Audience Reviews for Get Real