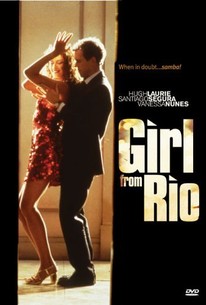 A mild-mannered banker finds himself living out his wildest dreams, only to wake up to a major dilemma in a continent-hopping comedy. Raymond (Hugh Laurie) is a British bank clerk who doesn't much care for his job, and whose marriage to Cathy (Lia Williams) has hit a rut. It would appear Cathy feels the same way about their relationship, since she's been fooling around on the side with Raymond's boss, Strothers (Patrick Barlow). Raymond's one escape from his dreary life comes from his part-time job as a dance instructor, and he often fantasizes about Orlinda (Vanessa Nunes), a beautiful and famous dancer from Brazil. One day, Raymond discovers that Cathy has finally left him to run away with Strothers, and Raymond snaps; he embezzles a fortune from the bank, and hops on the first plane for Rio, where with the help of taxi driver Paulo (Santiago Segura), he finds the lovely Orlinda, and to his amazement ends up spending the night with her. The next morning finds Raymond in a more stable frame of mind, and he decides he should return the money to the bank, but when he discovers Orlinda is gone, he realizes she took the embezzled funds with her, and now he has to find her and recover the money before it's too late. Santiago Segura is a major comedy star in Latin America, but he was cast somewhat against type in this film, since he's not Brazilian, but a Spaniard. ~ Mark Deming, Rovi

Critic Reviews for Girl From Rio

There are no critic reviews yet for Girl From Rio. Keep checking Rotten Tomatoes for updates!

Audience Reviews for Girl From Rio

There are no featured audience reviews for Girl From Rio at this time.