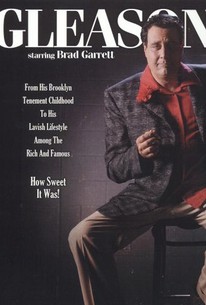 Everybody Loves Raymond co-star Brad Garrett brings "The Great One" to life in this made-for-TV biography of video icon Jackie Gleason. The product of a fractious Brooklyn childhood, capped by the abrupt desertion of his ne'er-do-well father, Gleason launches his show business career with the motto "Never depend on anyone." Yet because of his multitude of insecurities, he demands total loyalty and 100-percent devotion from everyone around him. Trouble is, he has no loyalty or devotion to give in return: Dedicated to his career, his drinking, and his womanizing (not always in that order), Jackie neglects his wife Gen (Gretchen Egolf) and his children, tyrannizes his associates in general and his faithful agent George "Bullets" Durgom (Saul Rubinek) in particular, and shamelessly steals other people's ideas and comedy material, claiming it exclusively as his own. For all his bluster and bullying, Gleason remains likable and arguably even lovable -- just like his most famous TV character, Brooklyn bus driver Ralph Kramden (indeed, the script suggests that Gleason was Kramden and Kramden was Gleason -- and that Jackie was envious of Ralph's ability to "make things up" to his long-suffering wife Alice at the end of each Honeymooners sketch). The film is at its best in its re-creations of Gleason's stage and TV triumphs, though one could nitpick about the hazy and often downright inaccurate chronology of events. As the title character, Brad Garrett offers an uncannily on-target portrayal, despite the fact that the 6'8" actor was nearly a foot taller than the real Gleason (this discrepancy was amply compensated for by the clever camera angles of cinematographer Neil Roach, not to mention the elevator shoes worn by practically every other member of the cast). Of the supporting players, Gretchen Egolf and Terry Farrell are superb as Jackie's first and second wives respectively, while Michael Chieffo's portrayal of Art Carney is eerily perfect. Co-written by Michael Preminger and Rick Podell, the same team responsible for Jackie Gleason's final theatrical feature Nothing in Common, Gleason made its CBS network debut on October 13, 2002.

There are no featured audience reviews for Gleason at this time.