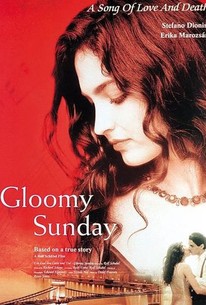 Gloomy Sunday is beautiful, well-acted, and every bit as downcast as its title.

Rolf Schuebel makes his directorial debut with this subtly-told true story about one the 1930s' most memorable melodies. Set just prior to WWII, the film focuses on Hungarian beauty Ilona (Erika Marozsan) and her significant other Laszlo Szabo (Joachim Krol), a dapper owner of Budapest's finest restaurant. Though Ilona is known for her prowess on the piano, the two decide to hire a professional as the finishing touch on their classy establishment. They hire Andras (Stefano Dionisi), a taciturn man with a certain mysterious charm. Meanwhile, regular customer and German businessman Hans (Ben Becker) finds himself utterly and completely smitten with the vivacious Ilona. When she spurns his advances, he drunkenly jumps into the Danube. Laszlo manages to rescue him and the three grow to become close friends. At the same time, Andras and Ilona grow to be something more than friends, and -- with the knowledge and approval of Laszlo -- they become lovers. Later, Andras composes a tune dedicated to his new consort and Laszlo quietly arranges for a couple of Austrian record execs to come to the restaurant to listen. Oozing with jaded ennui, the song, sans lyrics, quickly becomes an international success, yet it also seems to cast a dark spell over listeners -- people cannot help but commit suicide. In Hungary alone, 157 people killed themselves in the span of eight weeks. At the same time, the Third Reich marches into Austria. As the film progresses, Hans returns to Budapest, this time as an SS officer. There he offers Laszlo, who is Jewish, and who offers him free passage in exchange for money. This film was screened at the 2000 Berlin Film Festival.

Rolf Becker
as Wieck as an Old Man

István Kanizsay
as Journalist in Cafe

Laszlo I. Kish
as Schnefke