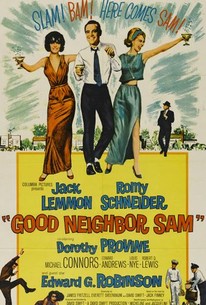 Jack Lemmon is Sam Bissel, a happily married ad man who finds himself in an awkward position. Mr. Nurdinger, Sam's new and wealthy client, prizes a wholesome lifestyle above anything else. He puts his faith in wholesome Sam to handle the campaign for his product. Sam has a dilemma, however, when he is offered $1 million to pretend he is the husband of his attractive and vivacious neighbor, Janet Lagerlof (Romy Schneider, in her first U.S. film role). Janet's grandfather has recently passed away and bequeathes her $15 million--provided she is living with her husband. As luck would have it, Janet's husband just recently walked out on her, so she begs Sam to play along. Janet must work quickly as her cousins have hired a private detective to catch her living apart from her husband. Sam's wife, Minerva (Dorothy Provine), obliges the two, but it is the ad agency and Mr. Nurdinger that Sam must contend with. Things begin to get really crazy, however, when huge billboards begin sprouting up--using the faces of Janet and Sam as the perfectly married couple endorsing Nurdinger Dairy products. Based on a book by Invasion of the Body Snatchers author, Jack Finney.

Vickie Cos
as Jenna

Barbara Bouchet
as Receptionist
View All

There are no featured audience reviews for Good Neighbor Sam at this time.