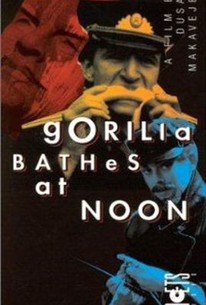 By the end of this whimsical little film, we learn that its hero, a Russian army officer, is afraid that others will learn just how good the food is in Berlin's city prison, and crowd him out of his place there. It is just after the reunification of East and West Germany, and Victor Borisovic (Svetozar Cvetkovic), along with the rest of his unit, is expecting orders any day now to return to Russia. Instead, every one of his men leaves; where they went, no one knows. The government hasn't been sending paychecks to the men for some time now, and even if they did, the ruble is worth almost nothing against the mark. Victor has no men to boss around, no money, and no food. So it is not too surprising to see him wandering around the city in his fine uniform, stealing food from the zoo's animals, and making the acquaintance of all sorts of people living on the edge. Really, being abandoned in Berlin is probably the best thing that has ever happened to him.

Aleksander Davic
as Dealer
View All

There are no featured audience reviews for Gorilla Bathes at Noon at this time.