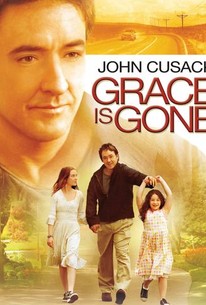 A refreshing departure from the current crop of Iraq war dramas, Grace is Gone is a heartfelt, finely acted portrayal of grief and healing.

The contemplative, understated tearjerker Grace Is Gone dramatizes the quiet crisis that befalls Stanley (John Cusack), a young Midwestern husband of a female marine stationed in Iraq, and a father of two girls. Suddenly and unexpectedly widowed when his wife, Grace, is killed on the battlefield, Stanley cannot bring himself to share the devastating news with his two young daughters. In lieu of speaking to them immediately about their mother's death, Stanley internalizes his devastation and takes the girls on a road trip while he attempts to sort through a myriad of conflicted and tumultuous internal feelings about the war itself and contemplates how to break the shattering news. Inevitably, the road trip will end with Grace's funeral. This film represents the brainchild of producer/star Cusack and writer/director James C. Strouse. It began with Cusack's fury about the Bush administration's policy banning footage of caskets returning from the Iraq and Afghani wars, and his desire to see those events played out onscreen, in the lives of American citizens. ~ Nathan Southern, Rovi

Marisa Tomei
as Woman at Pool

Zach Gray
as Boy at Pool
View All

News & Interviews for Grace Is Gone

Critic Reviews for Grace Is Gone

Audience Reviews for Grace Is Gone