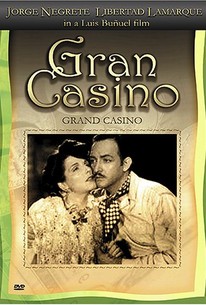 Two great Latin singing stars team up in this musical melodrama directed by the innovative Spanish filmmaker Luis Bunuel. Gerardo (Jorge Negrete) and his friend Demetrio (Julio Villarreal) are a pair of footloose cowboys in turn-of-the-century Mexico who are looking for work after escaping from prison on dubious charges. Gerardo persuades Jose (Francisco Jambrina), an tycoon from Argentina who is looking for oil in Mexico, to give work to himself and his friends, but just as their fortunes are on the rise, the oilman disappears and is feared murdered. Jose's sister Mercedes (Libertad Lamarque) travels to Mexico to find out what's become of him, and when she learns that Gerardo has taken over as manager in Jose's absence, she's convinced that Gerardo and his pals are to blame. Wanting to know more about Gerardo and his cronies, she takes a job as a singer as "Gran Casino," a rowdy nightclub near the oil fields; in time, she strikes up a romance with the good-hearted roughneck and learns just who her brother's enemies really are. Gran Casino was Luis Bunuel's first project after settling in Mexico in the wake of the Spanish Civil War and an unsuccessful attempt to seek asylum in the United States; an uncharacteristically conventional story which was not well suited to Bunuel's talents (and a musical to boot), Gran Casino fared poorly at the box office, and it was two years before he'd get to make his next film, El Gran Calavera. ~ Mark Deming, Rovi

There are no featured audience reviews for Gran Casino at this time.