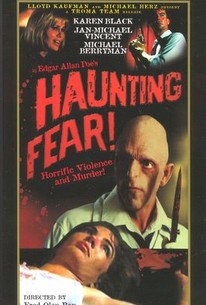 Exploitation king Fred Olen Ray bulldozes Edgar Allan Poe's story "The Premature Burial" in this sleazy direct-to-video thriller. B-movie babe Brinke Stevens stars as an heiress tormented night and day by the ever-present phobia of being buried alive. Thanks to hypnotic past-life regression sessions under the guidance of New Age therapist Karen Black, she learns that she was indeed buried alive in a previous existence. Despite her relief at this discovery, Stevens' money-hungry husband (Jay Richardson) still goes through with his plan to place her in a sealed box while she sleeps, hoping it will cause her to die of fright. Instead, she goes completely berserk, breaking free and coming after him with a knife. Though no cheaper than Roger Corman's early forays into Poe territory, this incoherent and sex-laden mess more closely resembles recent exploitation product from Corman's Concorde-New Horizons direct-to-video outfit, and makes 1962's The Premature Burial seem masterful by comparison.

There are no critic reviews yet for Haunting Fear. Keep checking Rotten Tomatoes for updates!

There are no featured audience reviews for Haunting Fear at this time.