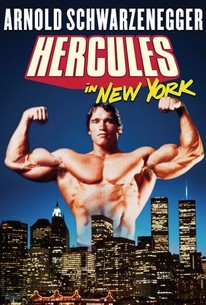 Every movie star has to start somewhere, and Arnold Schwarzenegger, then little-known outside of body building circles, made his screen debut in this comic variation on the "sword and sandal" epics popular in the 1950's and '60's. Hercules (Schwarzenegger) has grown tired of his life on Mount Olympus, and wishes to visit Earth. His father Zeus (Ernest Graves) forbids such a voyage, but a misdirected thunderbolt sends Hercules tumbling down the mountain and into New York City, where he's befriended by Pretzie (Arnold Stang), who runs a pretzel cart in the park. As Hercules tries to make his way in the big city with Pretzie's help, he runs afoul of a crooked wresling promoter, gets mixed up with gangsters, rides his chariot through Times Square, descends into Hell, and dines at the Automat (which some contend is not unlike descending into Hell). Just as Hercules is getting used to life on Earth, his angry father decides it's time the boy came home, and Zeus sends Nemesis (Taina Elg) and a handful of other gods to retrieve him. For the original American release of Hercules In New York, Arnold Schwarzenegger was billed as Arnold Strong, and his voice was dubbed by another actor to remove his accent; when the film was re-released on video in 2000, Schwarzenegger's original vocal tracks were restored, though the dubbed version appears on several previous video releases.

James Karen
as The Professor

Dennis Tinerino
as Atlas
View All

Weekly Ketchup: Dwayne Johnson May Be Hercules
SUNDANCE: "Awesome: I F**kin’ Shot That" Review
View All