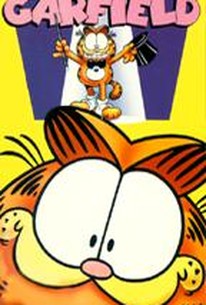 Garfield (voiced by Lorenzo Music) wakes up to a beautiful morning, looking forward to a day of mischief and food. After terrorizing their neighbor's dog (and then the neighbor himself), Garfield and Odie find themselves on the run from the city pound -- and Odie gets captured. At first, Garfield thinks he's glad to be rid of the dim-witted pooch, but soon finds that he misses his slobbering canine pal. When even food fails to cheer him up for long, he decides that it's up to him to rescue Odie. Very quickly, he finds himself behind bars along with Odie, being introduced to colorful characters like Fast Eddy and Fluffy (both voiced by Hank Garrett), who soon bring him up to speed on life on the inside -- and tell him that Odie is the next dog in line to be put to sleep. This prime-time TV special was the comic-strip cat's first animated appearance, featuring songs by Lou Rawls and Desiree Goyette.

There are no critic reviews yet for Here Comes Garfield. Keep checking Rotten Tomatoes for updates!

There are no featured audience reviews for Here Comes Garfield at this time.