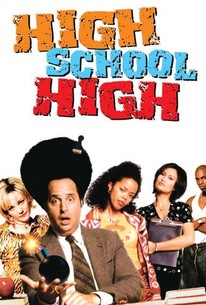 In this comic send-up of dramas set in urban schools (such as Lean on Me and Dangerous Minds), Jon Lovitz plays Richard Clark, a teacher who is persuaded to give up his position at Wellington Academy, an upscale private school (where the receptionist cheerfully answers calls with the question "Are you white?"), to take over a class at Marion Barry High School in Inner City, U.S.A. Marion Barry High is a far cry from the ivory-tower atmosphere of Wellington; the statue in the courtyard holds a crack pipe, the Michigan Militia sets up a booth for career day, and there's so much violence on campus that the school has its own graveyard; however, Clark is determined to reach his thick-headed charges, and he hopes to also make an impression on Victoria Chappell (Tia Carrere), a beautiful woman also on the teaching staff. Clark does battle with Evelyn Doyle (Louise Fletcher), the school's militaristic principal, in an effort to raise standards for the school's star straight-C students, and he finds that he's getting through to one of the school's toughest students, Grig (Mekhi Phifer). Screenwriters Pat Proft and David Zucker helped create The Naked Gun and its follow-ups. ~ Mark Deming, Rovi

Nicholas Worth
as Rhino

John Ducey
as Student With Paper