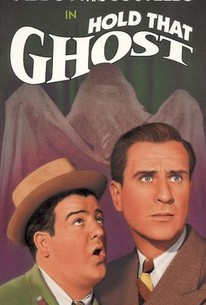 Hold That Ghost was the second of Abbott and Costello's starring films, but was held back from release in favor of their third picture, the more "topical" In the Navy. In Ghost, Bud and Lou play a couple of service-station owners who happen to be hanging around when gangster Moose Mattson (William B. Davidson) is killed. According to the terms of Mattson's will, whosoever is present when "the coppers dim my lights for the last time" will inherit his estate, which consists of a deserted mansion in the middle of nowhere. Crooked attorney Russell Hicks, who knows that Mattson has hidden hundreds of thousands of dollars somewhere in the lodge, dispatches sinister Charlie Smith (Marc Lawrence) to escort Abbott and Costello to the house, with instructions to "take care" of the trusting boys once they've arrived. Charlie charters a bus to take A&C out to the mansion; also on board, going off to various other destinations, are handsome Dr. Jackson (Richard Carlson), lovely Norma Lind (Evelyn Ankers) and professional radio screamer Camille Brewster (Joan Davis). It is inevitable that this disparate group is stranded along with Abbott and Costello in the forbidding mansion on a dark and stormy night. Charlie Smith is promptly murdered by parties unknown; throughout the rest of the film, Charlie's body pops up at the most inopportune moments, reducing the already tremulous Costello to a quivering mass of jello. The plot is merely an excuse to showcase Abbott and Costello's superbly timed cross-talking routines, a riotous impromptu dance performed by Costello and Joan Davis, and, of course, the legendary "moving candle" bit, which may well be Costello's funniest-ever screen scene. Hold That Ghost was originally designed and previewed as a 65-minute programmer title Oh, Charlie, but Universal decided to expand the length and throw in a few guest stars to secure top-of-the-bill bookings. This is why Hold That Ghost begins and ends with barely relevant musical numbers featuring Ted Lewis and the Andrews Sisters.

Ted Lewis
as Himself

Patty Andrews
as Herself

Laverne Andrews
as Herself

Maxene Andrews
as Herself
View All

Critic Reviews for Hold That Ghost

Audience Reviews for Hold That Ghost