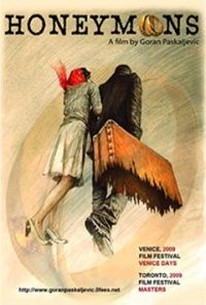 Goran Paskaljevic's newest film, Honeymoons (2009), will have a weeklong run at the Museum of Modern Art, from September 9 through 15, 2010. Honeymoons, the first Albanian-Serbian film co-production, follows two couples, one in Albania, the other in Serbia, who decide to leave their respective countries to realize their dreams in Western Europe. They soon find themselves trapped between their countries' past and their future lives together. Melinda (Mirela Naska) and Nik (Jozef Shiroka) leave Albania by boat for Italy, where they will be rid of the family obligations and village traditions that prevent them from being together. Vera (Jelena Trkulja) and Marko (Nebojsa Milovanović) head for Austria where talented cellist Marko has a chance of joining the celebrated Vienna Philharmonic. While all their visas are in order, both couples are left stranded at their respective borders. The men have nothing to do with the terrorist attack that occurred in Kosovo a few hours before their arrival, but a series of coincidences and ruthless officials shatter their hopes of fulfilling their dreams. Although the protagonists in Paskaljević's film never meet, they have inherited the legacy of the same past which, in the eyes of Western Europe, has rendered the region untrustworthy and unstable, and has cast over their lives a shadow of hatred, intolerance and sorrow. -- (C) NY MOMA

There are no featured audience reviews for Honeymoons (Medeni mesec) at this time.