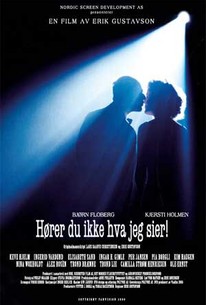 Irony abounds in this comical Norwegian story of two comedians married to each other. At first husband Stig is the star, a stand-up comic noted for his bawdy monologues and cutting remarks about his many friends and acquaintances. He loves his career and has a great time until the terrible night that his greatest fan, a stuffy insurance broker laughs himself to death in the audience. After that poor Stig cannot perform without seeing the broker's face staring back. Naturally this impacts his humor. His wife and manger Ane, who is also a talented singer blessed with an even raunchier sense of humor than his, takes over as his opening act. Soon she becomes the main attraction. Meanwhile the still traumatized Stig stays at home playing with his toy trains and hangs out with his depressed father-in-law who came to stay after he learned that his wife had an affair 50 years ago. Ane is also having an affair with a handsome drummer, more in retaliation for Stig's many indiscretions than out of any real lust. The many goings on are punctuated by asides made directly to the audience. This film will be most enjoyable for those who speak Norwegian as much of the subtlest humor is lost in the literally translated subtitles. ~ Sandra Brennan, Rovi

Per Christensen
as Astor

Per Jansen
as Oscar

There are no critic reviews yet for Hører du ikke hva jeg sier! (Shut Up and Listen!). Keep checking Rotten Tomatoes for updates!

There are no featured audience reviews for Hører du ikke hva jeg sier! (Shut Up and Listen!) at this time.