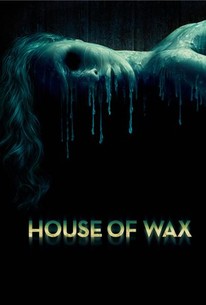 Bearing little resemblance to the 1953 original, House of Wax is a formulaic but better-than-average teen slasher flick.

A road trip to the biggest college football championship of the year takes a turn for the worse for Carly, Paige and their friends decide to camp out for the night before heading to the game. A confrontation with a mysterious trucker at the camp site leaves everyone unsettled, and Carly has her hands full trying to keep the peace between her boyfriend Wade and her hot-headed brother Nick. They wake up the next morning to find that their car has been deliberately tampered with, leaving them with no transportation. At the risk of being stranded, they accept a local's invitation for a ride into Ambrose, the only town for miles. Once there, they are drawn to Ambrose's main attraction -- Trudy's House of Wax, which is filled with remarkably life-like wax sculptures. But, as they soon discover, there is a shocking reason that the exhibits look so real. As the friends uncover the town's dark secrets, they are stalked by a demented killer and find themselves in a bloody battle for survival. The group must find a way out of Ambrose -- or become permanent additions to the House of Wax.

News & Interviews for House of Wax

Hear Us Out: House of Wax Is The Hidden Gem of 2000s Horror
16 Awesome Horror Sidekicks: A Tribute to Our Favorite Not-So-Final Girls
View All

Critic Reviews for House of Wax

Audience Reviews for House of Wax