How to Rob a Bank 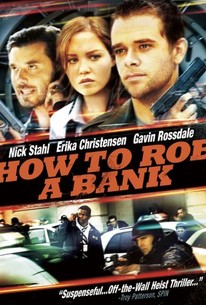 How to Rob a Bank

How to Rob a Bank Ratings & Reviews Explanation

How to Rob a Bank Photos

Nick Stahl, Erika Christensen, and Gavin Rossdale star in a high-stakes caper film in which the only thing for certain is that nothing is as it seems. Fed up with the manner in which super-sized corporations continually stack the deck against the common man, Jason "Jinx" Taylor (Stahl) reaches his wit's end after attempting to withdraw his last 20 dollars from the bank and getting refused due to the fact that the transaction fee will overdraw him. Locked in a tightly sealed bank vault with pretty Jessica (Christensen), Jinx struggles to find a way out as armed robber Simon (Rossdale) and his men search for a means of getting in. As Officer De Gespe (Terry Crews) and his men surround the bank, it begins to appear that the situation is slightly more complicated than the cops anticipated. When Simon fails to intimidate Jinx into opening the vault, loyalties are tested and the situation quickly turns volatile. Soon it's revealed that the true mastermind of the operation is a man whom no one had expected, and that in order to collect the funds that have been skimmed from bank fees over the course of many years, he will have to convince Jinx and Jessica to issue a secret PIN number. Now, in order to escape with both the cash and their lives, Jinx will have to convince cops and robbers alike that he and Jessica are merely hostages who need to be released before things get truly out of hand. ~ Jason Buchanan, Rovi

Sabrina Machado
as Hostage
View All

News & Interviews for How to Rob a Bank

Critics Consensus: Gold is a Fool’s Paradise, Roscoe is Not Welcome
View All

Critic Reviews for How to Rob a Bank

Audience Reviews for How to Rob a Bank

How to Rob a Bank Quotes