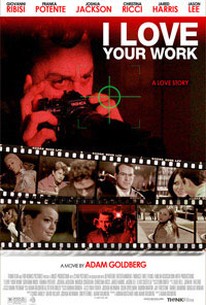 I Love Your Work

I Love Your Work Photos

Paranoia and obsession lead a popular young movie star careening down a dark path of self-destruction in this sophomore feature from actor-turned-director Adam Goldberg. Hipster actor Gray Evans (Giovanni Ribisi) is used to the blinding glare of the spotlight, and his volatile relationship with fellow movie star Mia Lang (Franka Potente) provides endless fodder for tabloid speculation among the celebrity-obsessed masses. Yet, despite his fame and wealth, everything is not well with this Hollywood hotshot. To the public Gray's cocksure attitude and Tinseltown swagger project the image of a man confident in his abilities and ready to embrace a bright future, but on the inside Gray is a lost soul full of doubt and teetering on the brink of insanity. Gray's stark but luxurious apartment is quickly filling with pictures of a mysterious woman named Shana (Christina Ricci), and when he suspects that he is being followed by a video clerk and aspiring filmmaker named John (Joshua Jackson), the increasingly delusional star hires a detective to investigate the matter. Assured by the detective that John is in no way a threat to Gray, Gray strikes up a friendship with John based in large part on his strange attraction to John's girlfriend, Jane (Marisa Coughlan). As Gray's infatuation with Shana begins to bleed into his friendship with the star-stricken young couple, the fixation he forms on the pair finds the actor growing increasingly unstable.

Dan Bucatinsky
as The Director

Elvis Costello
as Himself

Critic Reviews for I Love Your Work

Audience Reviews for I Love Your Work

I Love Your Work Quotes