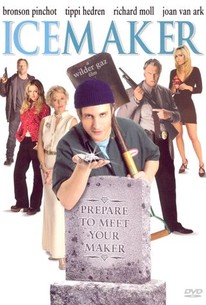 In a world driven by celebrity obsession, what better way to express your admiration of the Hollywood star of yesteryear than by having them glimmering from around your neck or shimmering on your finger wherever you go? At least that's the attitude taken by Dr. Lockbuster (Tim McNeil) as he enters into a lucrative partnership with notorious criminal Augustine Garza (Leo Rossi) and millionaire Quentin Leeds (Joseph Ruskin) to market "celebrity" diamonds made from the ashes of deceased Hollywood royalty. It seems that wealthy widows simply can't get enough of the glitz and glamour, especially diamond fanatic Mrs. Kelly (Tippi Hedren). But what happens when the men assigned the decidedly unglamorous task of acquiring the remains begin running out of "product"? With their decidedly finite supply of deceased Hollywood royalty rapidly declining, desperate grave robbers Bergerac de la Houssey (Bronson Pinchot) and Lulu (Darin Heames) soon begin shopping around for living candidates. When the murder of Quentin Leeds inspires investigators to pick up Bergerac for questioning, the nervous grave robber beats a hasty retreat while in possession of the famed Hemingway diamond that is said to have a hypnotic effect on anyone who comes in contact with it. With the police, Garza, and Mrs. Kelly hot on his trail, it seems that this quest for the ultimate gem can only end badly.

There are no critic reviews yet for Icemaker. Keep checking Rotten Tomatoes for updates!

There are no featured audience reviews for Icemaker at this time.