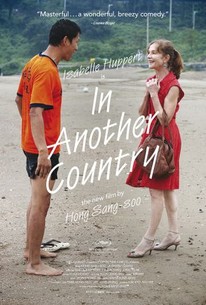 In Another Country offers intelligent observations throughout its trio of overlapping stories -- and demonstrates again just how much Isabelle Huppert's presence can improve a film.

In Another Country Ratings & Reviews Explanation

In Another Country Photos

Legendary French actress Isabelle Huppert (The Piano Teacher, 8 Women, La cérémonie, and the current Amour) stars in the first English-language film from South Korean master Hong Sang-soo (Hahaha, The Day He Arrives, Virgin Stripped Bare by Her Bachelors, Woman on the Beach). The Village Voice calls the film "the love child Antonioni and Hou Hsiao-hsien never had." In a triptych of overlapping stories, three different French women (a filmmaker, an adulterer and a divorce - Huppert, Huppert and... Huppert) visit a small Korean resort town and encounter a flirtatious director, a lovestruck lifeguard and far too much soju. Hong's latest tale(s) of love, lust and misunderstanding, IN ANOTHER COUNTRY is an effortless, laugh-out-loud comedy that plays like a lost French New Wave classic. Official Selection: Cannes International Film Festival (c) Kino

News & Interviews for In Another Country

Critics Consensus: Gangster Squad Is Style Over Substance
View All

Critic Reviews for In Another Country

Audience Reviews for In Another Country

In Another Country Quotes