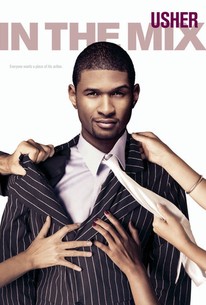 Fans may get a kick out of seeing Usher showcasing his charm on screen, but the movie itself is tone deaf and inconsequential, even by rom-com standards.

In the Mix Ratings & Reviews Explanation

In the Mix Photos

R&B star Usher Raymond plays his first starring role in this story which blends crime with romantic comedy. Darrell (Usher Raymond) is a successful club DJ who one night unexpectedly rescues a woman from a dangerous situation. It turns out the woman in question is the wife of Frank Pacelli (Chazz Palminteri), one of New York City's most powerful mobsters. To show his appreciation, Pacelli gives Darrell a job -- serving as bodyguard for this beautiful daughter, Dolly (Emmanuelle Chriqui). A short-lived romance blooms between Darrell and Dolly, but it isn't long before the couple are quarreling, which makes Pacelli more than a bit unhappy with his new hire. However, Pacelli also has a mob war and a disloyal and ambitious young lieutenant to deal with, and Darrell soon finds Pacelli's problems become his problems too. Also starring Kevin Hart and Robert Davi, In the Mix was produced under the title Dying for Dolly.

News & Interviews for In the Mix

Critic Reviews for In the Mix

Audience Reviews for In the Mix

In the Mix Quotes